The first east-west crossing of Australia’s Simpson Desert took place in 1969. When John Eggleston and Ian McDonald took the challenge using three Jeeps, they knew they were about to make history by traversing more than 1,000 sand dunes.

50 years later, the duo did not know that they would be part of the team that traveled in five modern Jeeps across the world’s great red center and survived through desolate and treacherous parts of the world. The original expedition was led by McDonald and came about after he had a conversation with Guy Campbell. Campbell was the general manager at Willys Motors at the time.

After thinking about it, Campbell realized that it would be one of the best ways to showcase the capabilities of the Jeep CJ-6 Overlander. The vehicles were prepared at the Willys Brisbane factory in Australia before being released for the journey. The crossing was divided into two: a short shakedown run and a long trip from Byron Bay to Steep Point. The journey took 40 days. It was done in two Jeep Overlanders, a Jeep J300 and a Rokon motorbike that scouted the areas.

The northern part of the Simpson can experience adverse temperatures under a rather unrelenting sun. This was one of the things that lured Eggleston, McDonald and the team to cut across the place. 50 years later, the place is still the same. The 2019 east-west Australia crossing was all about reliving the experience that McDonald had in 1969.

Among the requirements this time were vehicles built for extreme conditions and Overlanding. Participants had to have the right recovery gear and be capable of driving well behind the wheel. The leaders of the expedition spent almost a year planning for the logistics. This was necessary since the goal was to traverse 3,728 miles of desert with no support or services whatsoever. Water, gear, fuel, vehicle preservation, and food were critical elements that would ensure the team survived and succeeded in their journey. It took just 15 days to complete the expedition. 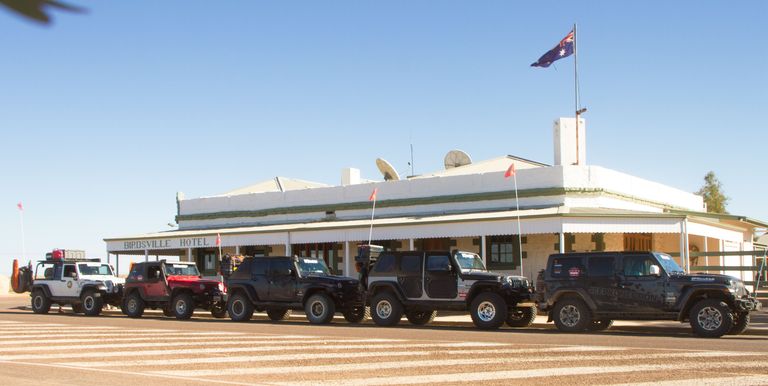 Among the participants was Vaughn Becker from Queensland, Australia. Becker had always wanted to bring back the legendary trip from 1969 for its 50th anniversary. He contacted the three surviving team members and other drivers, including one member from SEMA’S Media Award Judging Committee and Jeep Action’s editor-in-chief Ben Davidson. The latter reached out to Chris Collard from Adventure Architects.

America’s 4WD experts Sue Mead and Rick Péwé joined China’s Justin He and Canada’s cinematographer Derek Redmond as journalists. Karen McMullen and Alan McMullen from Victoria brought their four-wheel-drive expertise to the team with their 2009 Jeep JK-8. These two are famous in Australia for they have participated in international expeditions and have run a business that sold Jeep aftermarket accessories.

The journey started at the most easterly point of Australia, the Pacific Ocean near Byron Bay and retraced the original route towards the most westerly point, Steep Point. The team visited the iconic landmarks of Kata Tjuta (the Olgas), Finke Gorge National Park and Uluru (Ayers Rock). They also drove over 1,100 sand dunes across the Simpson Desert. The provision of water and preservation of vehicles were two of the most important elements of the entire journey. The trip logged a total of 7,456 miles of driving. The teams celebrated finishing the expedition by airing down their BFGoodrich tires.