In a bulletin that was released on 18 December 2019, Michelin plans to reduce tire allocations for multiple races and classes in the upcoming IMSA WeatherTech SportsCar Championship. The confirmed report was sent to competitors stating that Michelin tires would cut one set of tires for GT Le Mans class teams. The event will be at the Daytona Rolex 24 season-opening and will have 37 sets.

Mobil 1 Twelve Hours of Sebring will have three sets of tires less, bringing the total to 21 sets. LMP2 and DPi will have a set less for Sebring, getting the total down to 37 sets. GTLM teams will also see two sets of Michelin tires cut, reducing the number to 20. This is for the end of season Motul Petit Le Mans event that will be held at Michelin Raceway Road Atlanta.

Michelin did not make any increases in tire allocations across any of the classes for 2020. The only other significant change that the French tire manufacturer made was switching to the more robust S9M tire in place of the former Michelin Pilot Sport S8M. This change affects the GTD class that will race at WeatherTech Raceway Laguna Seca. Out of the 12 GTD races, only seven will have the S9M tires.

Below is a photo of the bulletin showing reductions in tire allocations: 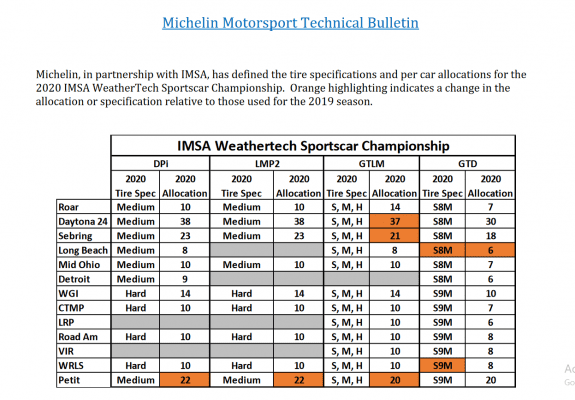 According to a report published by Sportscar365 in October last year, there might be incremental changes to tire allocations in some of the classes. This is because Michelin, being the exclusive provider for LMP2, GTD, and DPi, is looking to depict its cost-effectiveness when compared to its competitors and the longevity of its tires.