Formula 1 tire supplier Pirelli recently published the tires that F1 teams have chosen to go with for the 2020 Australian Grand Prix. This is after the teams unanimously rejected the new 2020 specifications after carrying out tests last year.

Some of the Pirelli Tires that will remain unchanged include the C2, C3 and C4 ranges. The teams also agreed to retain the same compounds used last year for the upcoming season. Below are some of the tires that will be in use. 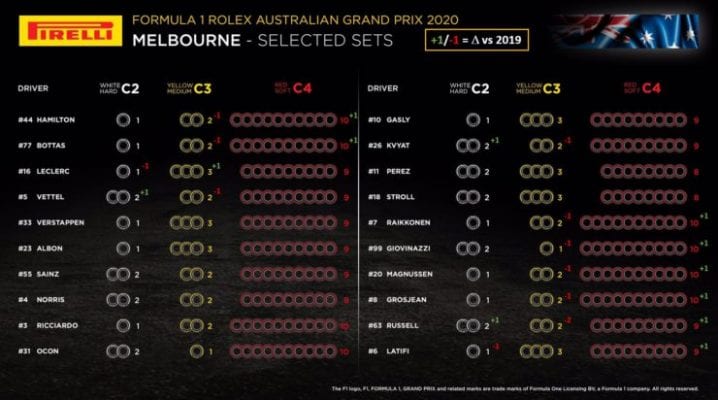 Every weekend, the teams usually have 13 tire sets available for them. Their only job is to pick tire compound combinations, giving rise to rather interesting strategies.

Mercedes, Haas F1, Alfa Romeo, and Renault have chosen to go with 10 sets of red-walled soft tires. This will be for all their cars. Red Bull, AlphaTauri, Williams, Ferrari, and McLaren have picked 9 sets. Racing Point is the boldest of them all, taking 8 sets of soft tires.

The strategies used by the teams do not differ much from what they did last year. However, it’s worth noting that Williams, Haas, Mercedes, and Alpha Romeo chose to add an extra set this year.

Some teams have chosen to change their strategies a bit when it comes to medium tires. Nicholas Latifi, Pierre Gasly, and Charles Leclerc have picked 3 sets of medium tires, making them the only single drivers to do this. Red Bull and Racing Point are also taking 3 sets and specifically, yellow-walled tires.

Those taking 2 medium sets include Sebastian Vettel, Daniel Ricciardo, George Russell, Kimi Raikkonen, Daniil Kvyat, the Haas pair, Mercedes duo, and McLaren duo. Antonio Giovinazzi and Esteban Ocon are the only two going with one set of medium tires each.

The only driver that has added an extra set is Leclerc. Those that have picked one set less include Hamilton, Vettel, Giovinazzi, Grosjean, Magnussen, Raikkonen, Kvyat, and Bottas. George Russell is the only driver who has reduced his set by 2.

Nobody has picked more than 2 sets of hard tires. Nicholas Latifi, Kimi Raikkonen, Pierre Gasly, Charles Leclerc, Red Bull, Mercedes, Daniel Ricciardo, and Haas decided to go with one set of hard Pirelli tires. The rest decided to run with 2. Leclerc is the only driver who picked on hard tire less compared to his choice in 2019. Russel, Kvyat, and Vettel decided to add an extra set.