The Porsche 911 GT3 (992) is currently in its seventh generation. Following its upcoming release, Porsche has decided to fit a new set of Michelin Pilot Sport Cup tires as standard. These will come as original equipment alongside Michelin Pilot Sport Cup 2 Connect tires that will be available as an option for those looking to experience maximum on-track performance.

The car was tested at the Nürburgring Nordschleife circuit in Germany earlier on while riding on the latter set of tires. It managed to cover the 20.8-kilometer (12.9 miles) track in 6 minutes 59.927 seconds. When the more referenced 20.6-kilometer lap distance is used, the car managed an impressive 6 minutes and 55.2 seconds.

The new Porsche 911 GT3 will have the following fitments:

Before settling on Michelin tires, Porsche tested three different tire manufacturers at the Hockenheim circuit. This was prior to the preparations for the Nürburgring tests. According to Porsche, Michelin offered the best track performance, making it the best tire company to go with.

In an interview that was conducted after setting the lap time, Lars Kern said that the Michelin tires felt incredibly balanced on the Porsche 911 GT3. He attributed this to their incredible driveability and response as well as their super high grip. 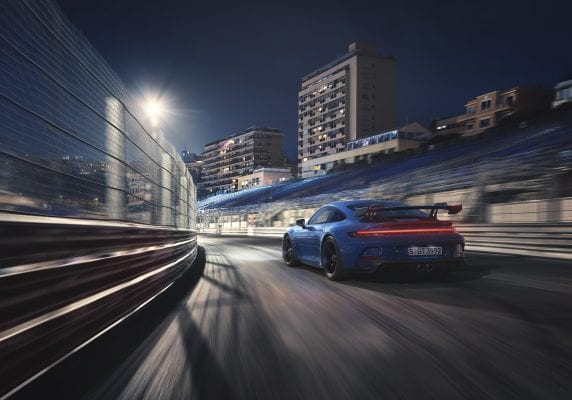 The Pilot Sport Cup 2 R Connect tires have a casing design based on the Pilot Sport Cup 2 tires with motorsports rubber compounds. They are made for drivers that want ultimate performance during their days on the track. The tires are also compatible with Michelin Track Connect sensors which allow them to be used with the Michelin Track Connect smartphone application. This allows drivers to monitor tire pressure anytime so that they can make adjustments to achieve maximum performance on the circuit.

The original equipment Michelin Pilot sport Cup 2 tires are specifically designed for the upcoming 911 GT3. They boast the new dual rubber compounds both at the front and rear. Michelin made sure that they adhere to the company’s ‘Track to street’ philosophy and that they include technologies from the highest levels of global motorsport.

With these new technologies, road drivers get to benefit from maximum durability, handling, safety, and grip during their everyday commute. They also get to switch to the racetrack comfortably without worry.

Porsche and Michelin decided to extend their cooperation agreement at the beginning of October 2020. The partnership will go on for another four years. It involves working together both in the production sector and motorsport. Michelin is the current exclusive partner of Porsche’s GT program WEC and majority of the international one-make cup series run by the company. This also includes the factory-organized Porsche Mobil 1 Supercup.

There’s already an extensive declaration in place that may see the two companies work together to achieve sustainability in all areas.